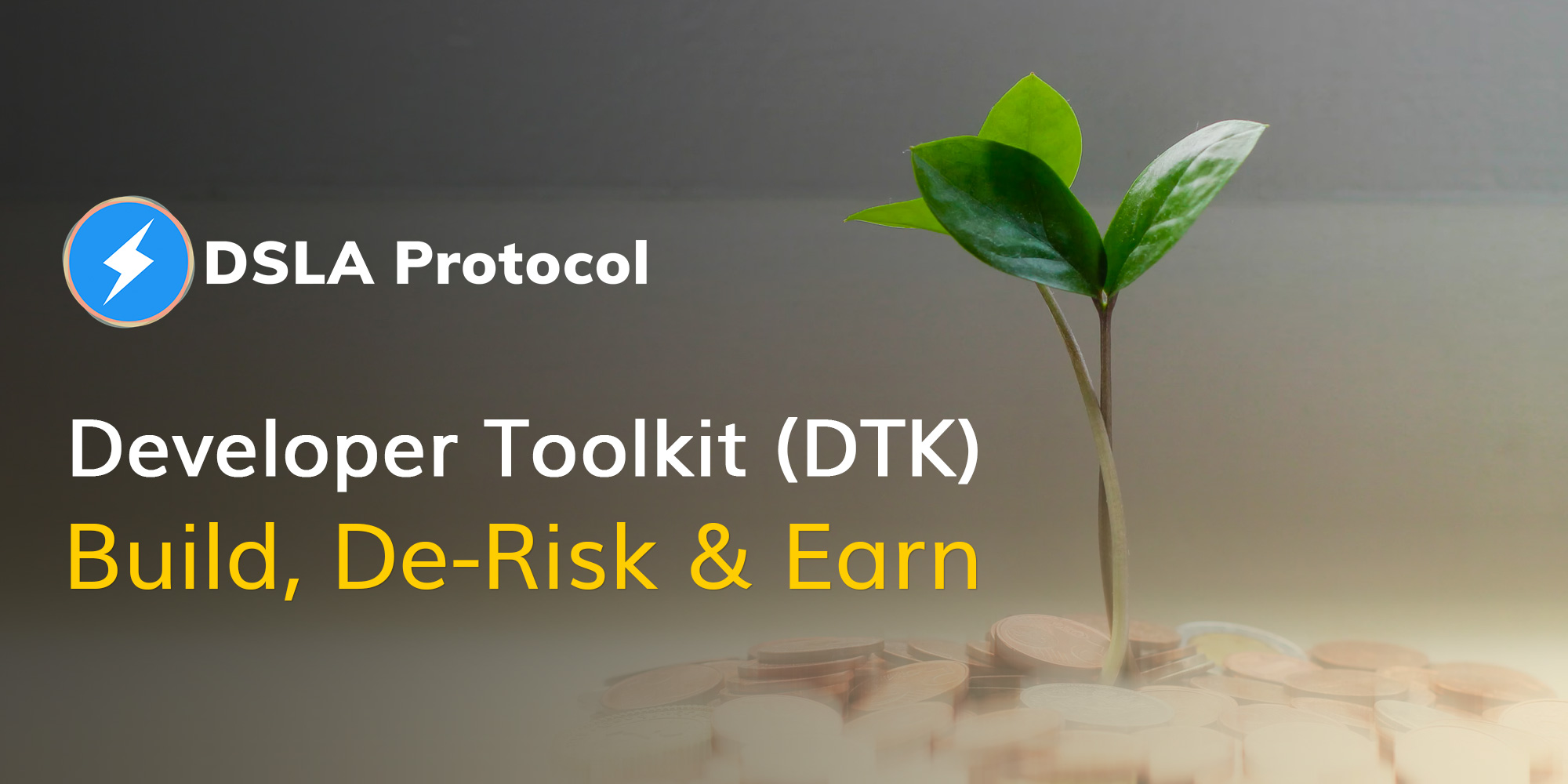 Insurtech as a Service, powered by Decentralized SLAs

The DTK empowers developers to build new use cases and risk aware applications using DSLA Protocol, and the Developer Guide is there to help you get started!

Why build on DSLA Protocol?

Second, developers can provide liquidity to the service-level agreements they create themselves, to earn additional revenue when application, network and service performance targets are met.

Last but not least, DSLA is a programmable protocol with built-in incentives for developers. Developers who create new use cases (tldr: new types of service-level agreements) earn a share of verification fees that are generated by that use case forever.

Every time someone requests a verification of a SLA, the creator of the Messenger contract receives a reward from the SLA contract creator (part of the verification fee), managed by the DSLA protocol in a decentralized fashion.

A use case is a real world situation where DSLA Protocol can be integrated to provide risk management capabilities.

On the technical side, in DSLA Protocol a use case is the combination of smart contracts, an Oracle middleware and data sources.

Every use case can be broken down into four primary components:

Below are the main DeFi related use cases that the DSLA Protocol core team are currently focused on, with APR/APY SLAs and Uptime SLAs already active on the flagship DSLA.network dApp.

However, DSLA Protocol is compatible with any application, network and service with measurable performance. In any industry.

Getting started with the Developer Toolkit (DTK)

Let’s go over some steps from the Setup and Quick Start sections of our Developer Guide to see how to quickly spin up the DTK on your local machine and get BUIDLing.

We highly recommend you check out the Developer Guide and read it in it’s entirety!

You are going to end up with two console tabs open at then end of this walkthrough.

Clone the DTK repo. You can check it out here

Make sure to switch into the cloned DTK repository folder, then run npm install

Next copy the env-min file to create your folder .env file

You will note that there are a lot of variables in the .env file, because Hardhat checks for them based on data from hardhat.config.ts; if any of these variables are not present you will have errors thrown in later steps of this guide while trying to load the DTK. However, as long as the variables are present, they may be empty or set to dummy values, as is the case for most of the variables in env-min.

Set your console to use the .env file as the source for environment variables.

Prior to running the next command, ensure that the index.ts file in the stacktical-dsla-developer-toolkit/networks has the develop network enabled. The develop network flag on line 4 should read { name: NETWORKS.DEVELOP, enabled: true },

Next, we will deploy local services for the ‘develop’ network including the local develop blockchain and IPFS node. Run the folling command to do so:

In a separate console tab navigate to your local DTK repo and run the following command to spin up your local external adapter:

The external adapter code can be found in the services folder under the external-adapter subfolder. It contains code for a simple Express.js app and can be modified to implement the logic of an indexer for a new use case.

Switch back to your working tab.

Now that services are running, we can deploy our contracts and Chainlink nodes using hh deploy with the following command:

This will clean any previous deployment of the ‘develop’ network and run the Chainlink nodes locally. You may run into a permissions error on the /services/chainlink-nodes or the /services/graph-protocol/postgres folders if you run the hh deploy command multiple times. If so, run the below commands to ensure permissions on these folders

Lastly we bootstrap the protocol, after which it will be ready to use! Bootstrap using the following command:

Optionally after this you can deploy a pre-configured SLA using:

And you can run a SLI verification on that SLA using:

That’s it, you’ve got a full, local deployment of DSLA Protocol!

Re-run the DTK after initial install

To quickly spin the DTK back up after install, open two console tabs and follow these steps:

Now that we have walked through a deployment, let’s quickly review the key parts of an SLA contract with DSLA Protocol.

#devtalk all SLOs are stored in the SLORegistry contract. The SLO is a struct composed of a value and a type. The value is a number, which will be compared to the number returned from a verification (Service Level Indicator verification). The type is the relationship between the two numbers and is itself an enum with possible values of: EqualTo, NotEqualTo, SmallerThan, SmallerOrEqualTo, GreaterThan, and GreaterOrEqualTo.

For example an Uptime SLA provider may commit to 95% uptime. The SLO for this example would be stored in a SLO struct with the value of 95 and a type of GreaterOrEqualTo.

The SLI is a check on how a service performed for a certain period. In essence, the SLI is a numerical value indicating performance during a specific period, which is calculated by measuring real world data for the service. The returned SLI value is compared against the SLO value according to the SLO type. This simple comparison gives a result that the SLA Contract uses to manage rewards and compensation for the period.

Continuing with our 95% Uptime SLA example. The SLO value would be 95 and the SLO type would be GreaterOrEqualTo. When a SLI is triggered it works through the external adapter, real world Uptime performance is measured and returned as a numerical value. If the Service maintained 98% uptime during that period, the value returned would be 98. The SLI value of 98 would be compared against the SLO value of 95 according to the SLO type GreaterOrEqualTo.

Periods, with respect to an SLA contract, have two meanings. First the start and end timestamp representing the term of the SLA, or the term that the SLO is active for. The second part is the type, which defines how often the SLO is verified with an SLI. This can be Hourly, Daily, Weekly, BiWeekly, Monthly or Yearly.

#devtalk Periods are stored in the PeriodRegistry contract. Start and end are unix timestamps for the start and end date of the SLA monitoring period. Type is an enum that can be Hourly, Daily, Weekly, BiWeekly, Monthly or Yearly. Lastly there is an initialized boolean variable used as an integrity check.

The SLA token pool is made up of a provider token pool and a users token pool. There is a relationship between the two, defined by a leverage value that the provider sets. The provider will initialize the SLA contract, depositing funds to back their service, which will compensate users if the identified SLO target is not met. The provider will also set the leverage, which will determine how much users pay vs. how much they may redeem in event of a service breach. Users will sign on to the SLA, paying a small premium into the users token pool, from which the provider may claim a reward if the SLO target is met.

Adding leverage to the conversation can seem a bit overwhelming; though it is present, it is usually something people don’t consider with their own insurance products. Consider a farmer’s crop insurance for a moment. A farmer takes out crop insurance, paying a small premium to receive a large payout in unfortunate event that their crop is destroyed. There is a leverage value in the relationship between the premium and the payout, the customer just generally does not see it.

For a deeper dive into tokenomics please take a look at this blog post.

A SLA is a contract between a service provider and service user(s) containing all of the above components. It will have an agreed SLO, which will be verified periodically according to a set SLI, and be active for a defined period or term. The token pool is contributed to by both the provider and users, and rewards or compensations are paid out of it according to the results of a periodic SLI vs SLO comparison.

#DubaiDeFi, the biggest hackathon on the Arabian Peninsula, is the perfect chance to get started using the DTK to BUIDL! Plus a chance at over $300K in prizes!

Read our blog post about it or head over to dubaidefi.io to learn more!

DSLA Protocol is a turnkey, peer-to-peer risk management infrastructure for developers and their communities, that empowers anyone to manage their exposure to the performance failures of application, network and service, using peer-to-peer service level agreements.

DSLA Protocol’s flagship use case is to optimize your staking rewards, by enabling you to hedge against the bad performance of your staking services.

To learn more about DSLA Protocol and the future of third party risk management (TPRM), please visit stacktical.com, browse our blog, and follow @stacktical on Twitter. 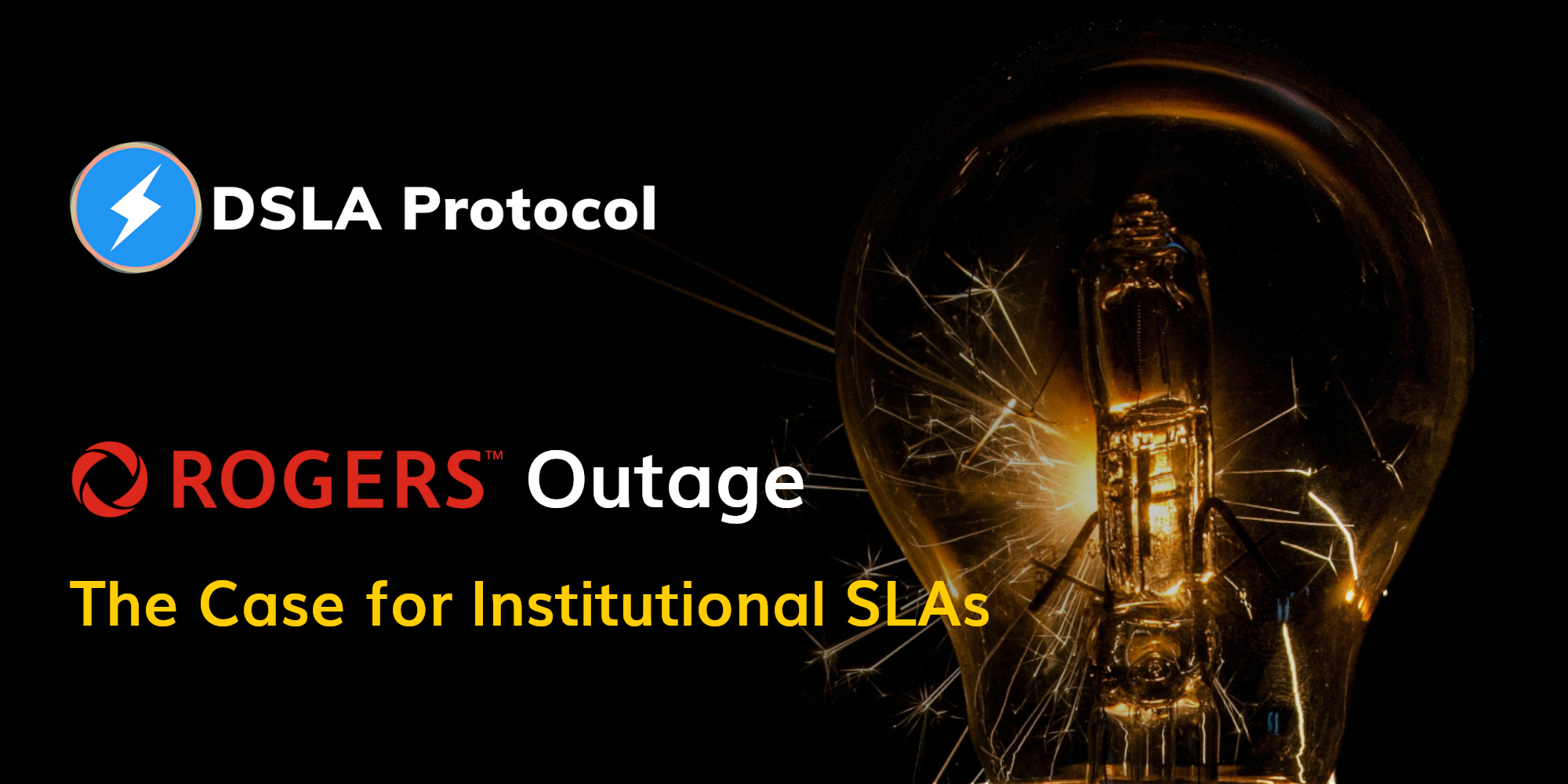 The Case for Institutional SLAs

## The Rogers Outage ⚠️ Rogers Communications is a major telecommunications provider in Canada, providing millions of Canadians with landline phone, internet and cellular services. Starting on July 8, 2022, the Rogers network went down for 19 hours, more in some places, due to a... 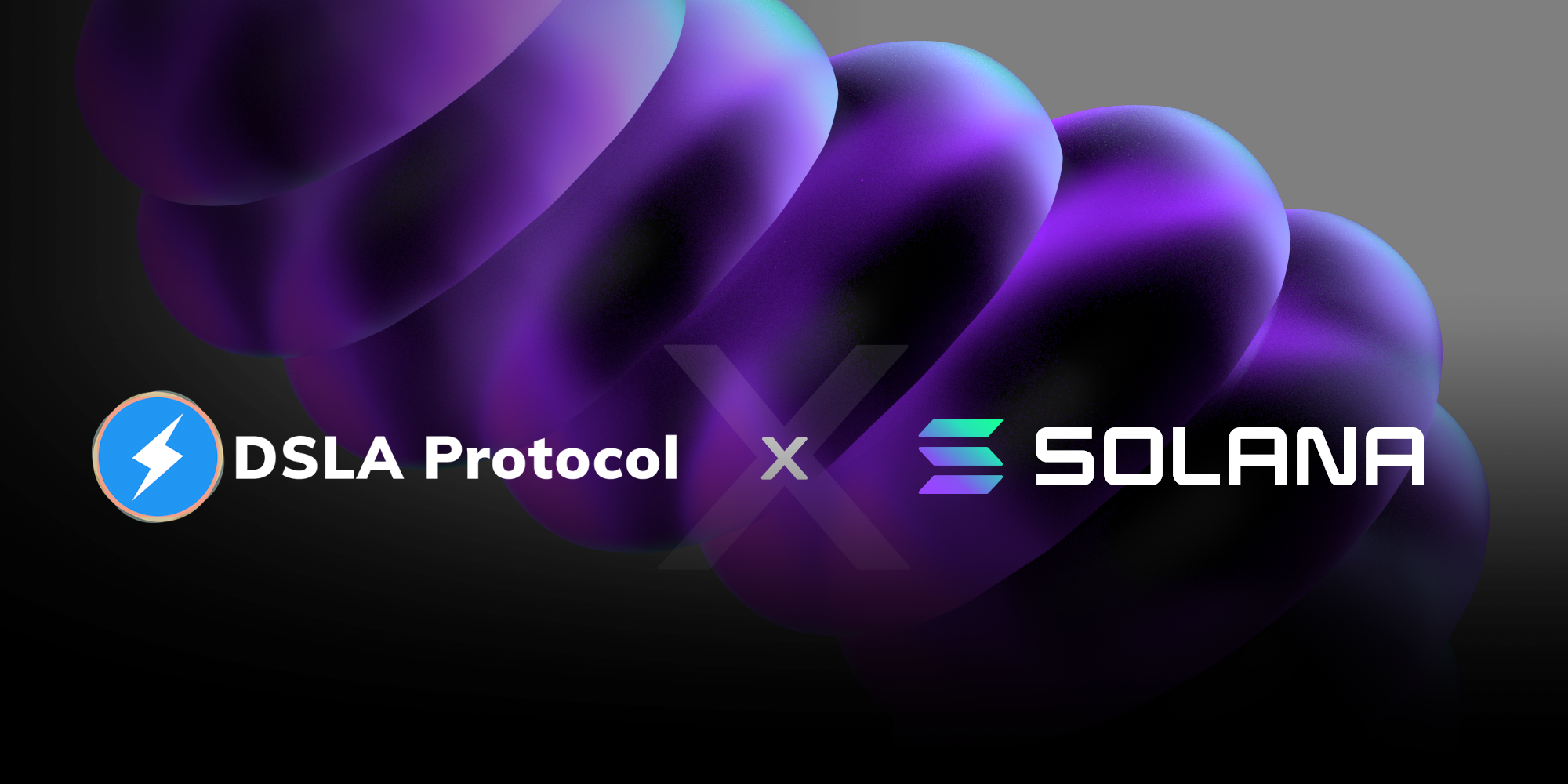 ## Calling All Solana Savants 🧙 We're porting DSLA to Solana and looking to kickstart a decentralized team to make it a happen! Solana will be the seventh network and developer ecosystem that DSLA is available on, and marks the first ***non-EVM*** implementation of DSLA.... 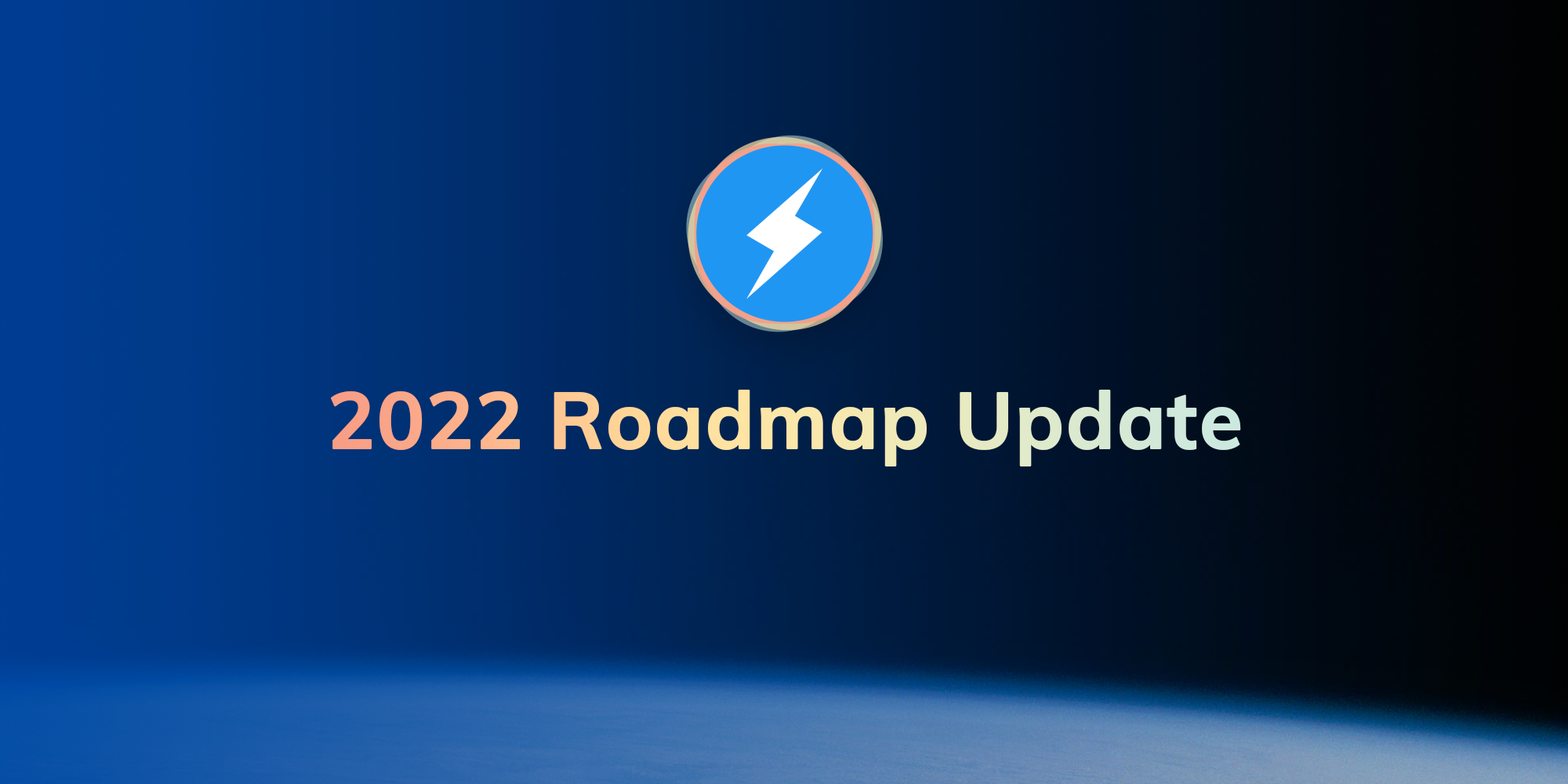 ## 🎯 New Year, New Goals Dear members of the DSLA community, stakeholders of the future of the Internet, we are excited to announce that our official website at [stacktical.com](https://stacktical.com) has been updated with the 2022 roadmap of DSLA Protocol, and the DSLA family of...